It is said that history is not reckoned in days, months and years, but in decades and centuries. Thus can be said of Ebenezer United Church of Christ.

Ebenezer began, not as a planned new church, but as a longing by people of the Reformed and Lutheran heritages of faith for a church of their own where they could worship in a manner and language that was familiar to them. In 1883, twenty-two individuals voted to commit to a building project and we still occupy this original building which today serves as the worship center.

As time progressed, improvements and expansions took place including digging out the basement, a new kitchen and Fellowship Hall, classrooms, a street level entrance, lounge, pastor’s office, and Upper Room. 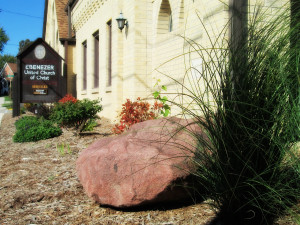 The church has an Evangelical and Reformed background, which can be described as a bridge between Lutheran and Presbyterian traditions.

The heart of Ebenezer Church is ecumenical, willing to work with other denominations and noted for its member’s service in the community.

Throughout our history, our congregation has been served by 11 ordained ministers. Today, we are lead by Rev. Michael Safford-Kennedy.

“Then Samuel took a stone and set it up between Mizpah and Jeshanah, and named it Ebenezer; for he said, ‘Thus far the Lord has helped us.’”